Gene Young is the man behind those realistic props

seen in scenes from beer commercials to 'Babylon 5' 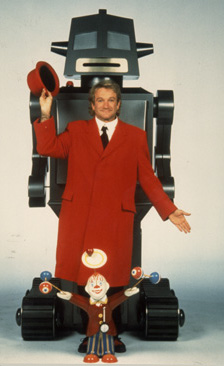 Gene Young likes to point out that if you look closely at the ray guns in Star Wars, they will seem vaguely familiar. If you look real close, they will appear quite familiar. They should. They are copies of a famous pistol, The 1896 Mauser broomhandle.  The model-makers made molds from a Mauser changed a few contours here, added a few gizmos there and, viola, they had an ray gun, and not just any ray gun, but a believable ray gun.

Young chuckled. The Mauser was the perfect choice, but only because of the perverse  nature of special effects. It's actually not much of a gun. State of the in 1896, it was to expensive for any army to adopt it, and soon was made obsolete by the 1903 Colt. But a lot of people bought the broomhandle

anyway - and still do – because, well, it looks so neat, just the way a futuristic, gee-whizzy pistol should look. It's played that role in the movies for nearly 100 years. It's all illusion, but

"We had just the opposite challenge when we designed the ray guns for the Buck Rogers TV show," said Young, Who Will be at the Museum of Flight next Week to discuss his work as a Hollywood model-maker. "They Wanted a ray gun that didn't look like a gun. No matter what We came up With, it looked too violent. How do you do a non-violent gun? Well, now it can be told: We Went to Radio Shack and bought a 4-inch flashlight. That they liked. Praised us for our originality." Model-making has been a respected art for centuries Leonardo de 'Vinci was one of its better practitioners - but it took the movies to turn it into the sophisticated amalgam of technique, portrayal and illusion that it is now. Young is one of Tinseltown's best, with his creations appearing in "Armageddon," "Back to the Future," "Total Recall"and the "Babylon 5" TV series, among others. They've also appeared in hundreds of ads, including a particularly memorable one for Federal Express. The ad shows a Fed EX jet being loaded,

flown, unloaded and so forth. The Federal Aviation Administration has strict safety regulations for air-to-air filming of real airplanes. The agency that designed the ad could not' comply with those rules and

still get the camera angles it Wanted. So it called Young. He did it all with models. 'The result looks so real that even when you know it is a model, it's impossible to tell. "Actually, our original version was too realistic," Young said. He and his crew at his Glendale company, Gene Young Effects, photographed a real jetliner inch-by-inch, then reproduced it down to every stain, smudge, exhaust streak and patch of faded paint. Fed EX took one look and decided it didn't want that much realism, especially if it meant its logo

Wasn't bright and shiny. Young responded that a bright and pristine model would look like a model, not

an airplane, and viewers would know it. Eventually model-maker and client reached a compromise: The rest of the plane could be stained and smudged, but the logo would be immaculate. That was just the start. The plane had to be shown in various attitudes, with different intensities of light, different shadow patterns and all kinds of other stuff. And it had to look like it was moving. To accomplish the movement, Young and his crew use a motion~control camera system in which the model remains stationary and the camera moves around it. The rest of the effects involve seemingly

In another project, the client asked Young to actually build a number of inaccuracies into a model. The

client was the United States and the airplane was the B-2 bomber. Everyone knew the B-2 existed and people in the aviation field knew, in general terms, what it looked like. But the Department of Defense refused to release any photos. By enlarging, enhancing and studying photos, engineers might figure out some of the B-2's secret aerodynamic features. Young's B-2 looked so realistic that the DOD planned to use it for official photos of the plane. No one could tell the difference - except engineers whose enhanced images would find an airplane that couldn't possibly fly. The DOD eventually decided instead to release photos of the real plane. The B-2's designers explained that even if someone could figure out its features, it would take scores of years and billions of dollars to develop the technology to actually build them. But Young still takes pride in the model.