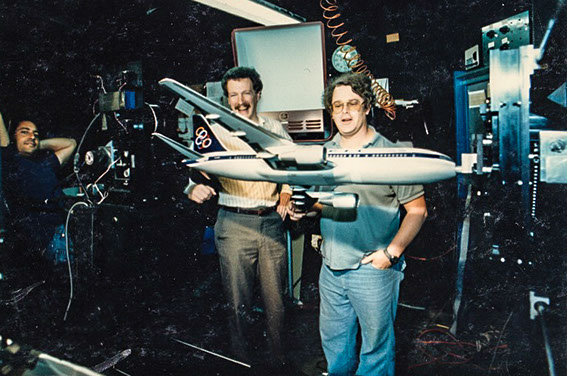 A pilot himself, Gene Young was a bit of an Airplane guy. His shop made a lot of them, and his motion control stage was just right for shooting them.

From print ads, to Television, to Feature Films, Gene Young's airplanes could be seen flying through the skys of them all.

Let's face it. Shooting footage of real airplanes flying around is impractical. Before you were able to download a CGI airplane file, You had to hire someone to build it. If you were lucky, Gene already had one hanging in his shop.

Gene Young's Airplane Models were used in everything from print ads to TV ads, and shows, to feature films.

Often times Gene would shoot the airplane sequences on the motion control stage in his Glendale Ca studio.

The Model Airplanes made at Gene Young Effects were not just used for cinema, or advertising. Many of the models were made for display. Some went to Museums, and some for corporate board rooms.